I realized after my first few noise hunting expeditions, VHF alone wasn’t going to cut it. There were too many situations where noise levels would be so nearly equal at several poles I could not be certain which one was the actual source. According to books and experience of others, UHF was the answer to this.

I spent some time looking for an inexpensive UHF AM receiver I could build, but ran into problems. Most of the published circuits used parts that are no longer available. I considered buying an MFJ-852 and buying or building a converter to go with it. I still feel that might be an ideal solution due to the wide receiver bandwidth of approximately 100 kHz.  I would still very much like to try that if I had any money left! However in the end I bought an Alinco DJ-X11 wide band all mode receiver. There were a number of choices, mostly dual or tri band handy talkies with wide band receive. I settled on the Alinco because of its I/Q output feature, which I believe may prove useful in analyzing RFI at some point. Since I have recently been named chair of our club RFI committee, I was also interested in this receiver for its wide range all mode capability. It should prove to be a very useful tool in dealing with other types of RFI. 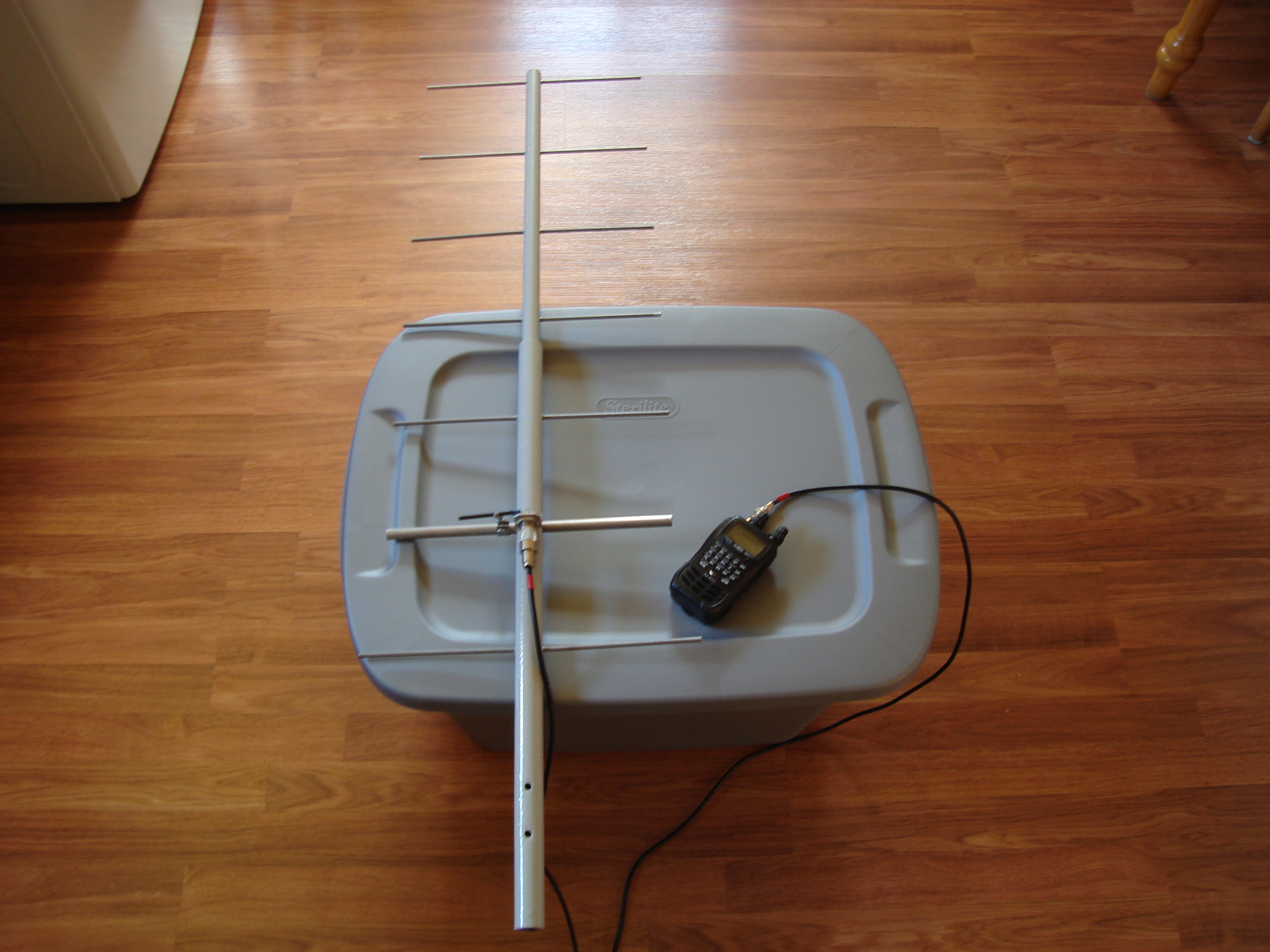 I needed a directional antenna for some UHF frequency. I had an old homebrew 11 element 440-450 MHz yagi in storage. After digging it out I realized it was a bit too long for comfortable use in the field. However, it was a simple linear taper design, wherein element spacing and director taper is constant. Usually such yagis are reasonably forgiving of changes in length. I modeled it in software to be sure, then shortened it to 7 elements, a more practical size. Field tests verified the antenna still had a good pattern after being shortened.

My first stop on the power line tour with the new UHF setup was an area where I had been having difficulty locating the exact source on VHF. The new system left no doubt. While I did get approximately equal noise from two adjacent poles when standing near each of them and pointing the yagi toward the top of the pole, I got a very different and revealing result when surveying from a distance. Imagine a string of 5 power poles in a straight line, equal spacing between poles, with the middle pole (number 3) being the one that is sparking. When standing at the base of pole 3 and pointing at pole 2 or pole 4, I got a minimal amount of noise. When standing at pole 2 or pole 4 and pointing toward pole 3 I got a much higher noise reading. When standing at pole 1 or pole 5 and pointing toward pole 3, I heard noise but at a much lower level. This indicated pole 3 as the source, which agrees with what the power line noise troubleshooter told me about that area. He found a bad lightning arrestor on pole 3. I was sold on the value of UHF in the tool kit at that point!

Results were not quite as conclusive in all areas. One in particular, where there are two poles with “prime suspect” hardware just 40 feet apart, remains somewhat perplexing. Nevertheless, I won’t be leaving home on power line noise hunting expeditions without my UHF sniffer!

Ultimately I was not satisfied with the Alinco for hunting power line noise. Instead of a distinct buzz, power line noise at any frequency in AM mode sounded more like a muted hiss. Unless quite strong it was hard to distinguish from the steady hiss of the receiver internal noise. A very strong signal was required to get any S meter deflection at UHF. Compared against other receivers. the Alinco performed very poorly for noise hunting. I have since sold it and will get something else after doing some research.