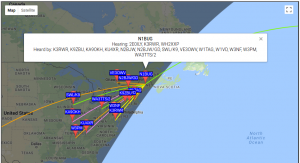 Results of my second night of WSPR transmissions. W3PM is 1909km from me.

I have been so busy with station building projects that I have failed to write about several of them. Those have resulted in my station being able to transmit on the 2200 meter band after nearly ten months of work toward that goal. In my first two nights running a WSPR beacon at 12 watts transmitter power I have been heard by more than a dozen stations at distances to 1909km (1186 miles). My effective isotropic radiated power (EIRP) is less than 0.1 watt, which is 10 dB down from the legal limit. I am confident my station can span the Atlantic on this band when I reach full legal limit.

My sincere thanks to NI7J/WH2XND for help getting QRV, also to K7PO/WH2XXP for help with an upcoming project to increase transmitter power. 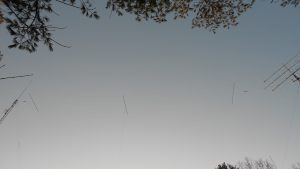 My transmitting antenna is a Marconi in a T configuration with 27m vertical and a top hat consisting of three 30m parallel wires spaced 1.5m apart. 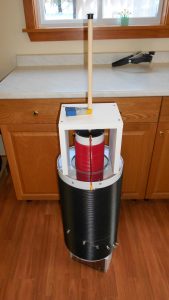 This is the loading coil / variometer for the antenna. Maximum inductance of this coil is 2500 uH. My antenna requires about 2250 uH to resonate at 137.5 kHz. I’m still thinking about a proper replacement for the spring clip.