I came to these bands with a long history of being a 160 meter DX hound. Some of my perceptions and expectations were influenced by that history. Clearly propagation is more challenging at the lower frequencies and being limited to very low EIRP doesn’t help. Nevertheless I was expecting to find a hard core group of low frequency DXers clawing away every night in search of those elusive long distance QSOs. Reality has proven to be very different.

On 160 meters we have a good amount of nightly activity. No matter how late the hour one can find avid DXers CQing away, putting in chair time because with propagation being so variable that is what it takes for success. You have to be there consistently. On 630 Meters that isn’t the case. There is a good amount of nightly WSPR beacon activity which clearly demonstrates the potential for DX QSOs, but very rarely are there human operators behind radios running QSO modes at the times when propagation is there. It seems possible to motivate small numbers to get on and make an effort once in a while, particularly after a very good run of nights on WSPR. This is prone to failure since propagation is so unpredictable. On 2200 meters there is very little activity of any kind, including beacons!

It is, of course, very difficult for most people to be on the air late at night, which is when most of the DX potential exists at lower frequencies. If it isn’t late night at one end of a DX path, chances are it is at the other. The question I keep asking is why do we have a core group of ever present DXers on 160 but not on 630 or 2200 meters? Part of the answer undoubtedly lies in numbers alone. Let’s face it, there are many more stations with 160 meter capability than there are stations with 630 and/or 2200 meter capability. There are a number of immediately evident reasons for the lower number of capable stations. It becomes increasingly challenging to build a capable transmitting antenna system on the lower frequencies. Man made noise tends to be more of a problem and some people live in locations which are hopelessly  noisy. There is a lack of commercial equipment available, so these bands are, for the most part, occupied only by those who build their own. All of these factors contribute to keeping the number of active stations down. Fewer active stations means fewer who have the drive and ability to be on late at night. Numbers clearly play a role in DXing activity. It is actually a rather small percentage of 160 meter operators who are there night after night seeking DX QSOs. Similarly it will be a small percentage on the lower bands but with far lower numbers overall this tends to keep the number of avid DXers below critical mass.

But it probably goes deeper than that. To explain the lack of DXing activity we probably need to consider other factors. What are the motivations and rewards for working DX? For some it is simply the thrill of making that rare contact. For others it is the pursuit of long term achievements, collecting operating awards. There are many awards available to the 160 meter operator: DXCC, WAS, WAC, and many more. This isn’t true for the lower bands. For one thing, most awards are not even offered for these bands. If they were, most of the traditional major awards would not be attainable down here. DXCC is probably not possible for the vast majority of stations on 630 meters and probably not for anyone on 2200 meters. Propagation and the EIRP limits simply put it out of reach. WAS may be possible someday for those in North America (when we have active stations in all 50 states, which hasn’t happened yet) but is probably not possible for those in other parts of the world for the same reasons DXCC is impractical. WAC? Good luck, same problems. Are there in fact any available and reachable operating achievement awards for these bands? Not that I am aware of. So there is one motivation missing. If a well established and recognized organization offered attainable operating achievement awards for these bands, it might help to spur activity, perhaps even attracting more people to these bands in the first place.

Do these bands tend to attract a different group of people? Probably to some extent, yes. With lack of off affordable off the shelf equipment and no awards program, these bands may tend to attract mainly experimenters and those with special interests in low frequency radio. It may be that a large percentage are more interested in experimenting than in making QSOs. The results of the latest antenna change or transmitter upgrade can be easily and effectively assessed through beaconing, primarily using WSPR mode. One doesn’t need to be up late  sitting behind a radio for this. Clearly some of the operators who are on these bands are recognizable as DXers on higher bands — 160 meters, HF, even VHF and UHF. But they are a small minority.

I have given this a good deal of thought and continue to do so. What I have arrived at so far is a sense that we simply haven’t reached critical mass for DXing activity on either of these bands. It takes a certain amount of activity in in place to motivate most people to stay up late and get on the air. Even the most motivated operator may struggle to convince himself to be there night after night knowing there very likely is no one there to work. When activity is so low that there is very little chance of working anyone, the motivation is missing or insufficient. I am struggling with this myself. I am a very avid DXer  and I am very interested in trying to work as many stations and states as possible on 630 meters. But, looking at my unattended JT9 decodes each morning clearly shows the chances of working anyone out west on any given night are extremely low. So low, in fact, that I am usually unable to convince myself to stay up and try. Of course this works both ways as having few here in the east to look for probably keeps some in the west from being on every night. With the overall low number of capable stations, DX minded operators and fewer incentives driving the desire for QSOs, it is my opinion that we haven’t reached critical mass. There is not enough consistent activity to get the ball rolling and keep it rolling.

So how do we change this? Can it be changed? Would it help if there were a small group of extremely hard core DXers committed to CQing during key times every night? Perhaps this starts with those at the end of a DX path presenting more convenient hours. If those who would need to be up very late at night to make these QSOs had assurance that there were stations making noise, would this increase the likelihood that they would try? I am currently trying a limited run experiment along these lines, as I have committed to calling CQ every night this week for at least two hours during a time that is convenient for me and frequently offers propagation to Europe. The hours are not so convenient on the European end of the path! Unfortunately this experiment comes to an end when I finish repairs to the 2200 meter loading coil and return to that band. My one other thought on the subject is that those who do succeed in making DX QSOs on these bands should do everything possible to publicize this far and wide – both within and outside the LF/MF community. We need to show the world that long distance QSOs can be made on these bands! We need to promote them as QSO bands, as I believe the outside world still largely sees them as experimenter and beacon territory.

Update 10 January: Over the past several days an experiment was carried out. I announced that over a several night period I would be calling CQ on JT9 mode for at least two hours during the early part of the Europe to North America window (which tends to be the least inconvenient time for the Europeans). This attracted the attention of a few who indicated 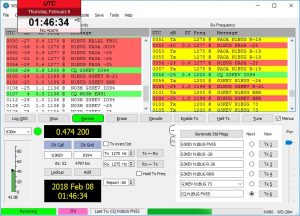 they would be looking for me. I promoted this as an activity period on both the European and North American email lists. I was joined on the North American side by NO3M and more casually by others. After a slow first night or two, I became the second in the U.S. to complete a trans-Atlantic QSO on 630 meters when I worked G3KEV (the first was AA1A working G0MRF several weeks earlier). Shortly thereafter, NO3M worked G3KEV. I had a partial QSO with PA0A. News of this success brought increasing interest. The following night both myself and NO3M worked G3KEV again. There were partial QSOs between N1BUG and OR7T, N1BUG and DK7FC, NO3M and DK7FC and possibly others but none of these were completed due to QSB or other factors. During this several night activity, hours of operation increased from two to four or more. That is a lot of chair time and CQing for very few QSOs. Clearly we have proven that many QSOs are possible but it will take dedication and effort. Frankly I do not have the stamina to sit there CQing four hours every night. If there were a large enough pool or interested operators to provide reasonable assurance that someone would be there every night, this might become self sustaining. As it is, we simply don’t have that level of activity.

Having more DX-minded operators on the bands would help. But getting on these bands can seem intimidating. There are some web sites that make it all sound so technical and complicated as to scare people away. It doesn’t have to be complicated. Probably the most challenging aspect is knowing what your EIRP is. If you can make basic measurements such as antenna system resistance and antenna current there are online calculators that take the work out of this. Chances are most hams have access to someone with the equipment to make such measurements if they don’t have it themselves.

Home built equipment can be very cost effective but one can buy a transmit converter for $80, a power meter for $40 and throw some wire in the air. If you don’t already have a receiver that works on these bands, there are inexpensive converters and simple SDRs that don’t cost an arm and a leg. There are some pricey equipment options out there. I don’t claim the cost is entirely unwarranted for those who can afford it. But it is not necessary to spend a fortune to get started or even to build a very capable close-to-high-end station. If you’re looking for intercontinental DX you will want to take the time to get up near the legal limit on EIRP but it can still be done on a budget.

For the time being, I suggest the most likely means of working DX is to organize and promote occasional “activity periods” where several stations at both ends of a DX path commit to calling CQ during a certain window for one or more nights. In the long term we need more DX-minded, motivated operators on the bands. Active promotion of the fun and challenge of DX QSOs on these bands is needed. A sensible awards program might be helpful.